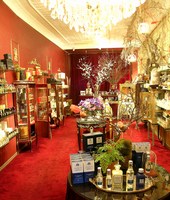 Aedes de Venustas is well known to fans of niche fragrances. The West Village boutique was founded by Karl Bradl and Robert Gerstner in 1995, and I when I dream about owning my own fragrance boutique, as I do from time to time, in my mind it looks pretty much exactly like what they have created at Aedes. I asked Karl to tell me how he became involved in fragrance retail, and how he, Robert, and store manager Miguel keep up with the competition.

How did you first become interested in fragrance?
My fascination with fragrance started when my mom gave me a bottle of Rothchild for Christmas in the early 80's. I was so much into the scent that I started exploring the fragrance market. At this time I was also very much interested in fashion and as we all know the glamorous 80's were all about designers and their fragrances. My scent library grew very fast...from Armani, YSL Kouros and Dior Poison...I covered them all. By the time I was 20 I got tired of the fact that everyone was wearing the same scents and my enthusiasm for fragrance slowed down. That was until I discovered niche scents. The mystique of niche fragrances made me fall in love again.

What was your career before you opened Aedes de Venustas, and what led you to open your own boutique?
It was all destiny! I grew up in a small German town and couldn't wait to move to a big city. As a child, I was obsessed with New York and it was always the city where I wanted to be. When I turned 18 I packed my bags and moved to Munich where I found a job in banking (and spent most of my lunch breaks at the perfumery across the street). Then I met my friend Robert, who was offered a job in New York and asked me to come with him. I thought I didn't hear right when he dropped the question.

In September of 1992 my dream became reality. We left everything behind and came here. Robert worked for international trade and I found a job in retail at Bagutta in Soho. During this time a German friend asked if I would like to run a skincare section in his store on West Broadway. I was all for it, but the line he had in mind didn't work out. I was so eager that I started to research other "hard-to-find" brands that nobody else had ever heard of, and although to my disappointment my friend rented out the space in his store for something else, I decided to continue with the project and that's how Aedes got started.

On a cold evening in January of 1995, while walking through Greenwich Village, Robert and I stumbled on a little space on Christopher Street right across from MAC cosmetics. Back in those days on the weekends there was an endless line outside of MAC. People lined up around the block to get their lipstick so it seemed like a perfect location for Aedes. At the time, there was no other boutique in NYC that was dedicated to niche perfumes. (I was not really aware of the expression "niche", I just loved these rare products I found).

Actually thinking back I was quite naive. I remember going up with a little giftbox in my hand and asking the concierge at the CondeNast building if I could see the beauty editor of Vogue. And yes, Amy Astley (who was super nice) was willing to see me in her office despite the fact that I didn't have an appointment. The next day she visited the store, and then she gave Aedes a mention in the October 96 issue, which started the ball rolling.

New York City does not lack for perfume boutiques, so I can imagine that you face serious competition. What do you think accounts for Aedes' success?
The flower arrangements, the romantic location in the West Village, the living room effect, the fact that we won't push a fragrance and would rather send someone home with a sample before making a wrong decision, the small talks with our customers...all this contributes to a personal touch and creates a positive energy that results in a shopping experience that makes the customer want to come back. We also cater to the corporate world in the Fashion and Entertainment industry on a regular basis, and that keeps us very busy.

Another very important issue is that we only carry products we believe in and use ourselves and do not jump onto a product line just because it is trendy at the moment.

What is the best thing about owning your own fragrance store, and what is the worst?
Owning my own business has been an enormous challenge for me, and I have learned so much in the 10 years since Aedes started. I am able to use my creative energy in a lot of different aspects. From weekly trips to the New York Flower market to pick the perfect flowers for arrangements, styling and shooting the Aedes catalog, decorating the store window, travelling and discovering new products...these are all things I looove to do. And on top of all this I am surrounded by the most wonderful fragrances and bottles. It certainly does not feel like going to work.

The worst: unfortunately e-commerce sites frequently take artwork from our website...pictures I did myself. I don't appreciate it.

What is your best selling perfume at the moment?
Serge Lutens Daim Blond

Of the fragrances that you carry, can you pick 3 favorites and tell us a little about them?
My favorite fragrance really varies. It depends on my mood, season, day, night, location...you get the picture. There is not a single one I can say: this is it. I guess I am surrounded with too many. But right at this moment these are the ones I wear:

Oud Queen Roses by Montale: Sophistication in a bottle... I love it. It's a fragrance you wear on a crisp fall day. It smells like roses infused with a touch of leather.

Costes Roomspray: I spray it around in my house but also on me. Miguel and I stayed at the Hotel Costes last April when we had a seminar at L'Artisan Parfumeur. The entire hotel is scented with this sensual smell. It carries me right back to heaven. (This one will stay on the list for quite a while. Miguel and I are using it a lot lately...that's why we are sold out of it most of the time.)

Serge Lutens Daim Blond: A fruity apricot start with wonderful warm notes of suede. Also perfect for fall and one I keep spritzing on at the moment.

But again there are so many other wonderful scents, it is very, very, very hard to only list 3 here.

And what are your 3 favorite fragrances that you don't carry?
Serge Lutens Encens et Lavande: Lavender in fragrance can be a bit on the boring side...this one is not. The lavender is full at first but it dries down to a clean incense note.

Jo Malone Orange Blossom: I am a big fan of anything orange blossom. It's soothing and puts me in a happy mood.

Note: both of the Serge Lutens scents mentioned above are in the exclusive line and available only from the Salons du Palais Royal Shiseido in Paris.

Thank you to Karl for participating in this interview. Aedes is located at 9 Christopher Street in the West Village, New York City, and their selection includes Diptyque, L'Artisan, Lorenzo Villoresi, Montale, Santa Maria Novella, and Serge Lutens, among many others.