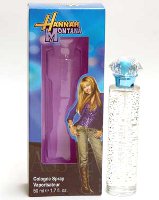 Wouldn’t it be great if this review started with “Disney Hannah Montana is a hidden gem! Its artful blend of fruit and flowers rivals the sinuous interplay of hyacinth and cassis in Guerlain Chamade. At six bucks a bottle, stock up now!” Yeah, it would be great all right. And a pack of lies. Except the part about the price.

The writers for the Hannah Montana television show were on to something. Back in 2007, “Smells Like Teen Sell Out” featured Hannah’s dilemma in publicizing her new — at that point fictional — fragrance line. In the show, her perfume smelled like raspberries and made her sick. She decided to go on television and tout the perfume anyway, but in the end she couldn’t lie to her fans.

Raspberries might have nauseated Hannah Montana, but by 2009 when her eponymous fragrance was released, the sticky combination of dewberry, peach, orange, passion fruit and grenadine (and jasmine, honeysuckle, blonde woods, vetiver and tonka bean) were all right with her. Frankly, Hawaiian Punch shows more restraint in the fruit department… 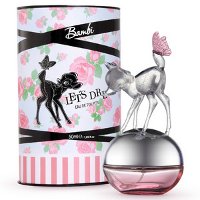 Disney, in collaboration with the Douglas perfume chain, has launched Bambi Let’s Dream, a new fragrance for young girls…

Here are a few more fragrance gift ideas for anyone who is joining me in doing all their holiday shopping online this year:

Benetton will launch Cumbia Colors fragrances for women and men this September:

Cumbia Colors for women, created by IFF’s Béatrice Piquet and Alain Astori, starts with a red fruit accord, followed by a floral note (cyclamen, lily) and ending with a sensual woody, vanilla, musky dry down. Its men’s counterpart [shown], signed by Drom’s Barbara Zoebelein, begins with a spicy celery, anise accord, with a melon and eucalyptus mix in the heart, while woody and musky notes closes the olfactory phrase. (via cosmeticnews)

Disney will launch a new fragrance, That's So Raven, this September to tie-in with its hit show of the same name. The fragrance features vanilla bean, white lily, lemon zest, and musk. (via Yahoo Finance link expired, sorry!)