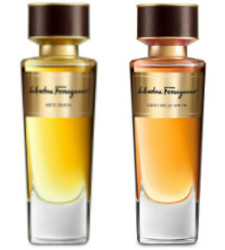 Arte Orafa ~ "Let notes of bergamot and lemon transport you to the foot of the Tuscan hills. Get lost in the enticing aromas and sublime scents of Tuscany with this bright and aromatic scent from Salvatore Ferragamo. Crafted with notes of Oud, the Tuscan Creations Arte Orafa eau de parfum is reminiscent of sun-soaked days bathed in golden light – simply spritz and go for a little slice of Mediterranean paradise anywhere in the world." Additional notes include cardamon, raspberry, orange blossom and olibanum.

Orto Delle Spezie ~ "Rich, heady cedarwood intermingles with notes of sweet vanilla. Inspired by the art of the apothecary, Salvatore Ferragamo presents this enticing fragrance, which is both an opulent addition to your dressing table and an enveloping scent that’ll linger long after sundown. Infused with notes of saffron and rich spice, the Tuscan Creations Orto Delle Spezie eau de parfum is an artisanal aroma inspired by the alluring beauty of Tuscany." Additional notes include nutmeg, date fruits, ciste and sandalwood.