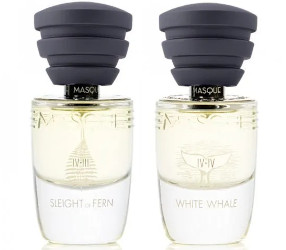 Act IV - Scene III Sleight of Fern ~ developed by perfumer Stephanie Bakouche. "Ever since the niche fragrance house was founded in 2010, the plot line of an elaborately designed opera production has connected Masque Milano's fragrances. Designed for four acts, each act in turn consists of four fragrances dedicated to its theme. Sleigh of Fern forms the third scene of the fourth act of this opera and interprets the theme of dreams coming true in a mixture of classical arrangement and unexpected new interpretation. Its sophisticated concept fuses bergamot and lavender with fig juice and red thyme. The intense heart note seduces with a melange of tuberose, geranium and narcissus and rests on fine woody notes alongside the essential oakmoss for a fougère. Seductive tonka bean and patchouli notes round off Sleigh of Fern and give its composition its own distinctive sound."

Act IV - Scene IV White Whale ~ "With White Whale, Masque Milano unveils the finale of its olfactory opera that has grown over ten years! Composed by perfumer Christian Alori, the interwoven sounds of another literary classic, dedicated to the theme of the dream, unfold and describe the hunt for the mythical white whale translated into scent. Moby Dick, the wooden whaler Pequod, and the salty waves of the ocean are found in this melange alongside book pages illuminated by soft candlelight. [...] The smell of candles, ropes and the vastness of the ocean form in White Whale's opening of olibanum and black pepper alongside a complex salt accord. They head towards a fragrance centre of hypnotic ambergris and osmanthus, violet and orris, in keeping with the image of the gigantic whale. The base of White Whale is the energetic meeting of whale and ship. Composed of woody notes, vetiver, cistus and labdanum, the image of the whaler's weather-beaten planks and sails emerges."