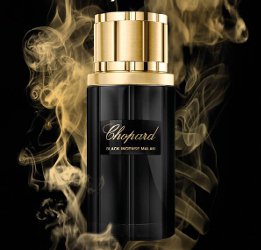 French house Chopard has launched Black Incense Malaki, a new fragrance in the series that began with 2012's Oud Malaki.

...with Black Incense Malaki, the Maison pays tribute to the millenary tradition of royal Frankincense, one of the most ancient and treasured aromatic plants of perfumery.

...Black Incense Malaki showcases a superb array of 14 natural essences from the world over, among which 5 are from Naturals Together, Firmenich’s program of Excellence, guaranteeing the highest level of natural ingredients, ethically and sustainably sourced. Black Incense Malaki is a powerful and heady elixir, unfolding in luxurious layers of aromatic, woody, oriental-smoky notes and resins. A new olfactive emotion in which frankincense oil stands out at the heart of the composition.

"Black Incense Malaki is a tribute to the noble heritage of incense and its olfactory fascination. I imagined the fragrance as an intensely aromatic and rich elixir of frankincense gums burning with rare spices and precious woods soaked in scented oils. Its powerful trail, which I layered with oud and leather notes, reminds me of royal fragrant ceremonies and exhilarating swirls of smoke.” — Alberto Morillas, Master Perfumer