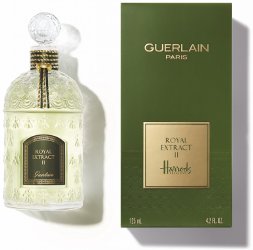 Stalwart Houses from opposite sites of the Channel team up for a fragrance that is simultaneously exotic and classic with the Guerlain x Harrods Royal Extract II parfum. Named for Guerlain’s founder, Pierre-François-Pascal, who debuted his Royal Extract of Flowers for the courts of Europe in the early 19th century, this tribute scent is bottled in Harrods’ signature colours, while its olfactory heart takes the wearer on a fairytale journey through a wild forest as notes of wood, moss and potent flowers gradually reveal themselves.