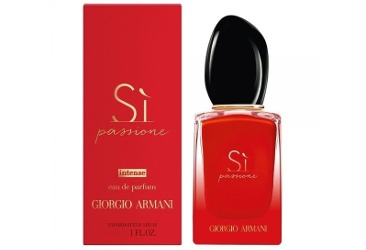 The iconic Sì signature of blackcurrant nectar is blended with an emphatic floral heart made of a jasmine duo, creating a fierce and powerful energy that is further enhanced by patchouli essence and vanilla extract. An ode to vibrating femininity, Sì Passione Eau De Parfum Intense celebrates the contrast between the floral brightness and the intensity of passion.

In Giorgio Armani's own words, "Intensity doesn't need to be dark. Intensity is a movement in the making, a continuous vibration"