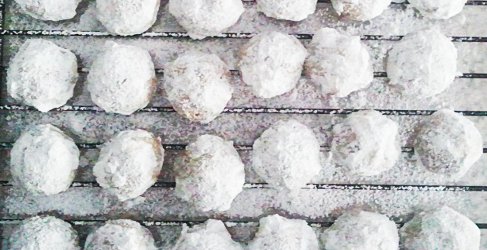 Reminder: on 12/13, we're doing Scents of the Season, part 2...wear something that smells like baked goods, or has a baked goods accord, or just reminds you of holiday baking. Suggested by thegoddessrena.

Note: top image is russian teacakes [cropped] by Stacy Spensley at flickr; some rights reserved. [You can find the recipe for those cookies here. My recipe for what we called "Mexican Wedding Balls" is very similar, and those were my favorite cookies as a child and possibly the first I learned to make myself. 1/2 lb soft butter, 1/2 cup powder sugar, 2 cups sifted flour, 1/4 t salt, 1 1/2 cup ground pecans, 2 t vanilla. Knead, roll in balls, bake 20 minutes 300-325 degrees, roll in (more) powdered sugar. Or, here is a Serious Eats version that adds cinnamon.]