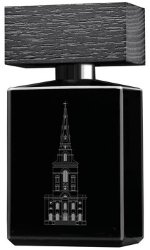 Hawksmoor – referred to as ‘the Devil’s architect’ – continues to provoke interest for his distinctive churches, which introduced elements of Egyptology into traditional ecclesiastical settings. These curious architectural details and his recent reputation as a Freemason has prompted speculation that occult symbolism influenced his methods, and imbued his designs with an inherent ‘terror and magnificence’.

By contrasting darkness with invigorating complexity, perfumer Pia Long has combined a vivid olfactory impression of the man, his works and his myth. Accords of Somalian Incense, dry woods and wet stone meld with opium smoke, papyrus and kyphi, underpinned by a base of Haitian Vetiver, Labdanum, Benzoin and Myrrh resins. As perfumer Pia Long comments “the fragrance we created feels like it has always existed, as though we’ve conjured a myth into being from the ether”