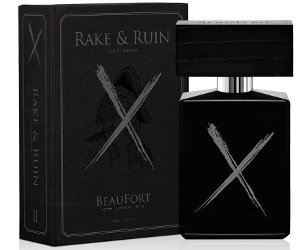 In 1751 the novelist Henry Fielding proclaimed that ‘Gin-shops are undoubtedly the Nurseries of all manner of Vice and Wickedness.’

Seeking to illustrate this downfall of public virtue, between 1732-34 the English artist William Hogarth published eight canvases depicting A Rake’s Progress. One of Hogarth’s most infamous works, the protagonist Tom Rakewell’s ruin is depicted by his exposure to high living, prostitutes and gambling.

Inspired by these Hogarth’s scenes of degeneracy within the Georgian metropolis we revive their spirit in Rake & Ruin – a fragrance capturing an evening in a tavern, where gin flows, good times are had, and the slide begins…

This powerful Eau De Parfum (30% concentration) features the botanical ingredients of the drinks that filled the glasses, the dark woods of the floors on which they were spilt and animalic allusions to the debauched deeds that took place between them.