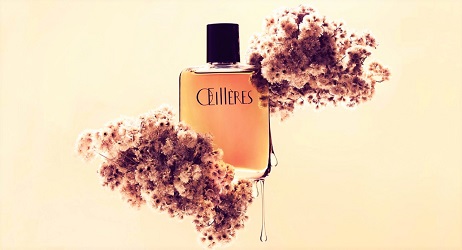 Œillères L'Objet Parfumant* is described by photographer Roberto Greco like this:

With the Œillères series, the flowers I shot become an allegory of the human condition. Suspending the moment of decay, wherein that volatile yet neglected moment of decline is magnified. At a time when what surrounds me appears smooth and lean, the bodies depicted echo the flora. With shrouded faces, focus remains on the corporeal, the flesh.

Œillères is a series composed of thirty-one images, and a bespoke scent, L'Objet Parfumant, accompanies the photographic series. It was created under my artistic direction by Parisian nose Marc-Antoine Corticchiato after two years of hard work, the amount of time required to achieve the desired effect: an anti-flower fragrance.

A short video for the Œillères project can be viewed here. The film immediately reminded me of American Horror Story credit sequences, and it certainly, to my nose, has no connection to L'Objet Parfumant, a retro perfume that brought to mind not only powerful, glam French perfumes from the 1940s and 1950s but the early glory days of Serge Lutens, too.

Though no fruit is mentioned in its fragrance notes list, L'Objet Parfumant begins with a deep plummy scent; it smells as if ripe plums are bobbing in a sugar syrup that's spiked with herbs. Aromas of hay, frankincense and cumin come to the fore quickly (and the scent could be a "relative" of Eau d'Hermès). The perfume has great strength and projection but it pays to sniff, up close, where you applied the fragrance. Embedded in the "recipe" are interesting scented facets: medicinal salves and tea blends and smoky earth aromas. L'Objet Parfumant wears down to a  plush/creamy musk (that does indeed smell 'animalic,' not like laundry products); the musk mixes with residual cumin and the broom note. Though L'Objet Parfumant is an "anti-flower fragrance," it sometimes reminded me of the gutsy scent of carnations as it existed long before IFRA restrictions. 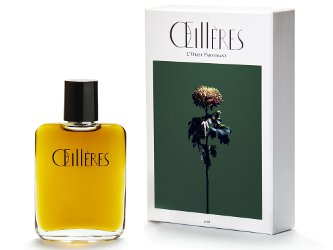 As I wore L'Objet Parfumant I thought of MANY NST readers, and contributors (Robin and Angie...looking your way) who might love this; but everyone who's interested should act — 500 bottles of L'Objet Parfumant were made, so sample and buy sooner, not later.

Roberto Greco Œillères L'Objet Parfumant Parfum Extrait is available for $215 (50 ml) at Luckyscent in the U.S.