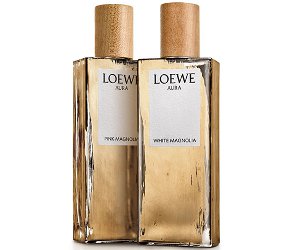 Spanish luxury brand Loewe has launched Aura White Magnolia, a new floral gourmand chypre fragrance for women. Aura White Magnolia is a flanker to the 2013 version of Aura, and was released in conjunction with Aura Pink Magnolia. 2016's Aura Floral (not shown) has been released in a similar bottle with a silver brushstroke.

LOEWE Aura White Magnolia, the new Eau de Parfum from the LOEWE Aura family. A fragrance of enveloping notes with a 20% concentration of essential oils. Tremendously feminine and dazzling with a strong Mediterranean character.

Inspired by the aura that envelops a woman. Designed in an innovative, circular structure. Magnolia Flower at the center of the composition. A new flask design that captures light and is adorned with a golden brushstroke that incorporates real gold particles. With a cap made of Sycamore wood that represents its organic nature.

The notes include magnolia, cotton candy, vanilla and yuzu.