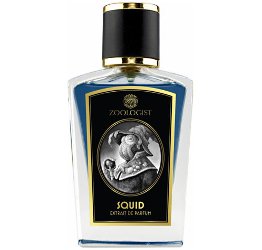 The vast ocean swells and contracts, caught in the relentless tug of the moon. Beneath the surface, a school of squid emerges. Strange, elastic forms propel from the deep in a frantic search for sustenance. They are not alone. Their predators lunge, only to be foiled by blinding jets of murky ink. The hunt ends abruptly as a monolith materializes, greedily engulfing all in its path. The massive sperm whale dives, leaving a temporary peace bobbing in its wake. Decades on, relics of the battle resurface. Lumps of ambergris, expelled by the whale and polished by the salty currents, wash ashore. Waste? Flotsam? To the perfumer this elusive substance is nothing less than treasure.

Zoologist Squid sings a song of the sea, a melancholy tale told through tangy brine, crisp incense, and sweet, cloudy ink, all united by the moody aroma of ambergris. Like the endless depths that inspired it, this elegant scent ripples with mystery.

(via Zoologist Perfumes at Facebook, additional information via twistedlily)