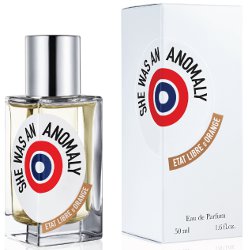 "This perfume is the result of something unexpected. I played with Carto, Givaudan’s AI-powered tool for suggesting formulas. I gave it beloved and familiar notes. Carto suggested an overdose of two ingredients. I took care of the rest." – Daniela Andrier (Perfumer)

Update: as of 9/2, the notes listed above are what is listed on the Etat Libre d'Orange website. She Was An Anomaly is classified there as a woody floral, and is also available in 7.5 ml. Here is the brand's description...

Ever since its inception, Etat Libre d’Orange has been an oddity, a deviation from the norm, an eccentric in the world of perfumery.

We don’t fit the patterns, we don’t follow the traditions.

This is who we are.

Another update: as of 9/11, the notes are listed as iris, sandalwood, cedar, vanilla, fresh white flowers accord, green tangerine, musk and amber.