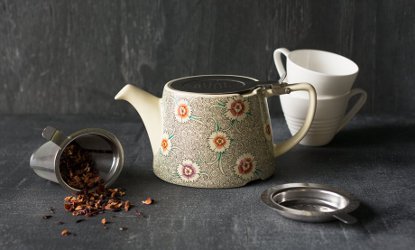 Tuesday and Cow Appreciation Day. Tom Hanks is 63 today. What fragrance are you wearing?

I'm wearing Parfums de Nicolaï Balle de Match aka Eau de Sport. Tea at the moment is an organic Colombian black, which will be followed shortly by a bit of iced coffee and then a cup of the Juniper Ridge Douglas Fir & Rosehips tea (thank you, Regina, for tipping me over the edge with your review).

Reminder: 7/12 will be Henry David Thoreau's birthday, aka Simplicity Day. Do absolutely whatever you like with the theme. (My favorite piece about Thoreau and Walden: Pond Scum: Henry David Thoreau’s moral myopia, from The New Yorker back in 2015. The other side: In Defense of Thoreau: He may have been a jerk, but he still matters at The Atlantic. Also, from a couple years after the original kerfluffle: A Radical for All Seasons: The surprising persistence of Henry David Thoreau in The Nation.)

Note: top image is the Dianthus teapot by The London Pottery Co & Kaffe Fassett, about $50 at Amazon.