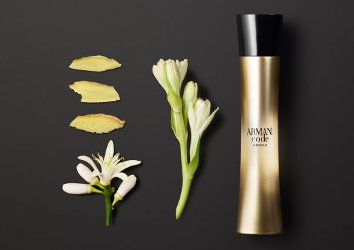 Armani Code Absolu, the new seduction for women is a sparkling, sensual, opulent fragrance. The addictive tonka bean base of the classic Code has been amplified by a warm and sensual bouquet of orange flower, jasmin and tuberose notes. Sweet vanilla at its base and sparkling ginger at its head round up an enveloping and carnal fragrance, which radiates with seductive power. The latest addition to the Armani Code range, the Armani Code Absolu fragrance for women blends the addictive thrill of the encounter with the contemporary elegance of the ultimate seductress, the Armani Code Woman.The iconic Armani Code bottle, with its sinuous curves and its elegant shiny black cap, shrouds itself in a precious golden dress with a transparent heart, luminous as the white flowers bouquet it entreasures.

Additional notes include mandarin and sandalwood.