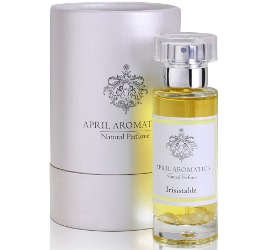 The Iris flower earned its name from the ancient Greek Goddess Iris, a messenger to the Gods, who was thought to use the rainbow as a bridge between heaven and earth. The ancient Greeks believed the rainbow was actually the flowing, multi-colored robe of Iris. Thus these flowers were named to honor the rainbow Goddess and bring favor upon the earth.

[...] The Iris flower represents royalty and nobility and was considered to be a symbol of kings and queens for hundreds of years. This perfume contains the sweetest yellow Iris Pallidia from Italy; it is joined by white Jasmine Grandiflorum from India, red Rose absolute from Bulgaria, yellow Lemon from Italy, white Tuberose blossoms from India, a touch of orange Cassia from Sri Lanka, rounded up in a base of golden Sandalwood and many more.

Only the best all natural ingredients were used. That’s why this perfume feels like a treasure of rainbow jewels from around the world. Working with Iris essence helped me to unblock old patterns of self-limitation and stagnation and it inspired me to reach new heights of beauty and grace, restoring a path to art and creative self expression.