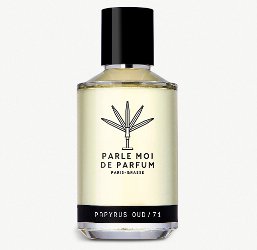 Founded by Benjamin Almairac, Parle Moi de Parfum is a contemporary Parisian perfume house with a passion for blending only the finest, raw ingredients. The Papyrous [sic] Oud / 71 eau de parfum (1971 was the date of the creation of the United Arab Emirates) is inspired by the scents and culture of the Middle-East, with dry notes of side of Incense and Papyrus, intertwined with to the rich scent of Oud.