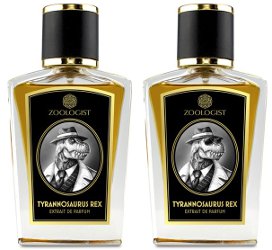 A sultry heat wafts across the land, lapped up greedily by the abundant flora that thrives in its midst. Trees soar to majestic heights and plants flower for the first time, their petals spreading to give birth to a world rich in diversity. The Cretaceous period comes of age against a backdrop scorched by wildfire and lightning strikes. Over this turbulent landscape, a massive predator looms. Giants rule the earth, but even giants can be cut down within the powerful jaws of the fearsome tyrannosaur. Standing tall, the terrifying beast fears nothing, until that pivotal moment when a fire in the sky signals the end of their deadly reign.

Zoologist Tyrannosaurus Rex is a gargantuan scent that sinks its teeth into the world of delicate fragrances and rips it wide open. Primitive woods and florals seize you and snatch you away to an ancient era. Smoky, charred wood warns of the danger of smouldering fire, setting your senses on edge, while droplets of metallic rose oxide offer a chilling premonition of blood-lust. The mighty Tyrannosaurus Rex is sometimes menacing, sometimes fascinating, but never, ever ordinary.

Zoologist Tyrannosaurus Rex can be pre-ordered now at Luckyscent, $175 for 60 ml Extrait de Parfum. A special edition with a red box (and sunglasses on the T Rex; shown above right) is the same price, but only 450 were made.

(via Zoologist Perfumes at Facebook, additional information via luckyscent)