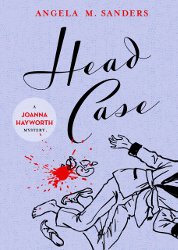 Maybe you're mentally packing your hamper for your Memorial Day weekend beach trip and want something frothy but smart and maybe a little humorous to read while you dig your toes into the sand. Something with, oh, a retired jewel thief, Hollywood gossip, martinis, vintage gowns and a dead body. Look no further.

Head Case, the fifth book in my vintage clothing mystery series, has launched. It's $3.99 on on Kindle, Nook, iBooks, and Kobo. The paperback will be out in June. (If you want to start with book one, The Lanvin Murders, it's only 99 cents in ebook.) As Cynthia Kuhn, Agatha award-winning author of the Lila Maclean Academic Mysteries and Styling Texts: Dress and Fashion in Literature, says:

The Vintage Clothing mysteries offer a compelling blend of suspense and style. In every book, the memorable characters, twisty plots, and delectable fashions are beyond fabulous. Highly recommended, especially for those who like a little couture with their crime.

In Head Case, when Joanna Hayworth visits Bradley Stroden, a onetime protégé of legendary costume designer Edith Head, she expects to find closets bulging with drool-worthy gowns to stock her Portland, Oregon, vintage clothing store. Instead, she finds a corpse.

With movie costumes as bait, Joanna investigates why Stroden was murdered. Could it be tied to the tell-all Hollywood memoir he was writing? Or to a midcentury film noir that was mysteriously yanked before it was released? Or to his “adoring” sister? At the same time, Joanna stumbles upon a priceless pair of emerald earrings hidden on her laundry shelf. Her houseguest has some explaining to do.

To unravel these crimes, Joanna enlists the help of the Book Bunnies, an oddball group of middle school girls. Joanna’s new marriage — and, possibly, her life itself — depend on figuring out who is acting and who is for real.