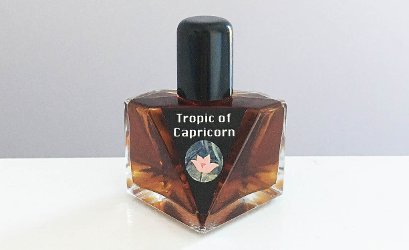 Occasionally reviews describe a fragrance as smelling “vintage.” To me, it signals that the fragrance follows the conventions of a classic perfume style, like a floral aldehyde with a musk-sandalwood-vetiver base, or a mossy chypre. Besides that, it often means that a perfume simply isn’t fashionable.

Olympic Orchids Tropic of Capricorn smells vintage, in the animalic, leathery way of Caron Narcisse Noir Extrait. It’s definitely not fashionable, but it has a lot of style. This is a perfume for Gloria Swanson in Sunset Boulevard.

Ellen Covey is the nose behind Tropic of Capricorn, which launched in 2013. It’s made with 100% natural materials, including mango fruit, jasmine, frangipani, tuberose, magnolia, osmanthus, maile vine, Bourbon vanilla, Africa stone, ambergris, benzoin and New Caledonian sandalwood. It only comes in Extrait form. The Olympic Orchids website says of the fragrance:

It’s called “Tropic of Capricorn” in honor of the theme, the winter season when it was created, and Henry Miller’s work in which he writes about “the dark fecundity of nature, … a night so frighteningly silent, utterly incomprehensible and eloquent at the same time.” The perfume creates the aura of a still, humid tropical night redolent with the scent of exuberant, blooming life, quick death, and the almost immediate rebirth that springs out of the dead flowers, something sensed at a level below conscious thought.

Reading this, do you picture decomposing sludge sprouting flowering vines admid rotting fruit? Translate that image into scent, and you have Tropic of Capricorn — at least, initially.

Just after drizzling Tropic of Capricorn on my forearm, I smell leather, Scotch whisky, silver spoons, damp mulch, and the mango I put in the crisper drawer a month ago and forgot about until today. It smells of decay and rooms that haven’t been opened in decades. It’s one formidable fragrance. It wins the “least likely to be duped at Bath & Body Works” prize. All those lovely floral notes listed above? They’re quivering in the corner, afraid to come out lest they be steamrolled by iodine, sludge, and leather.

After twenty minutes or so, Tropic of Capricorn stubs out its cigarette and says, “Well, since we’re both stuck here, why not chat a bit?” It relaxes. It becomes less aggressively animalic and sweetens as amber and sandalwood muscle in. Now I smell fruit and a bit of the garden. Tropic of Capricorn is like a big but young wine that is tight and unapproachable until it wakes up to breathe with you for a while. “Scary? Just kidding,” it seems to say. “Now you understand me, don’t you?” And it's delicious.

Tropic of Capricorn lasts a good six hours on my skin — not bad for an all-natural scent. If I owned a bottle, I’d be tempted to save it for damp mornings in the garden, or for cocktail events in a bias-cut 1930s gown. Tropic of Capricorn isn’t for the faint of heart, but if you’re a fan of Vero Profumo Onda and Caron Narcisse Noir in Extrait (and maybe of noir films, blood purple lipstick, and duck liver pâté), it’s worth sampling.

Do you have a favorite contemporary fragrance that feels vintage to you? Please share!

Olympic Orchids Tropic of Capricorn is available in Extrait only in a 5 ml travel spray ($25), 15 ml screw-top bottle ($65), and 30 ml atomizer ($120). A sample is $6. You can buy it at the Olympic Orchids scent website and at Potion Natural Fragrances.