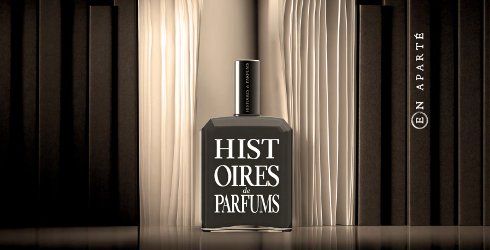 Like a conversation, perfume is an expression, which at times comes in the form of a declaration and at other times as a secret. There is that which can be said aloud and clearly, and that which can only be expressed in private, with the utmost discretion. Such an intention is featured in the En Aparté collection. A space offering complete freedom to elicit without compromise while coveting secrets and privacy as well. Irrévérent, Outrecuidant, Prolixe, three compositions unveiled behind closed doors at Histoires de Parfums.

Outrecuidant ~ "[utʀ əkɥidɑ ̃̃] adj. Litt. [ETYM. old French cuidance evolving from the Latin cogitare: « to think » and outre « beyond, too much »]. || Showing great self-confidence. - Ginger, Cardamom - || Obvious, unmistakable pride. - Olibanum, Rose - || An impertinent and insouciant personality, daring. - Patchouli, Tobacco, Aoud - In a great shimmer, ginger, nutmeg and cardamom provoke a verbal joust with the burst of a high and pretentious roses in reaction to olibanum’s retort. The response to a waft of tabacco was not long in coming, so that in the end, aoud, who was roused by patchouli, also understood his arrogance. An olfactory power that is not afraid of presumptuousness."

Prolixe ~ "[pʀ ɔliks] adj. Litt. [ETYM. Derived from Latin. Prolixus: « That which is widely diffused »]. || Filled with a wealth of details. - Cassis, Grapefruit, Pineapple - || Revealing distraction and wandering. - Saffron, Cardamom, Orange Blossom - || Excessive, exuberant. - Cedar, Sandalwood, Patchouli, Labdanum, Leather - Grapefruit, Cassis and Pineapple... surround and envelope us while Saffron and Cardamom demand seduction with their enormous blaze, becoming all the more dazzling when illuminated by Orange Blossom. In a flash, Cedar’s many dimensions, Sandalwood’s creaminess, Patchouli’s earthy strength, Labdanum’s adorned warmth, and the obscure intensity of Leather all come together. Abundance, fullness, opulent gourmand, a profusion of rich spices, and a strikingly balmy and woodsy deepness."

Histoires de Parfums En Aparté Irrévérent, Outrecuidant and Prolixe will be available in 15 and 120 ml.