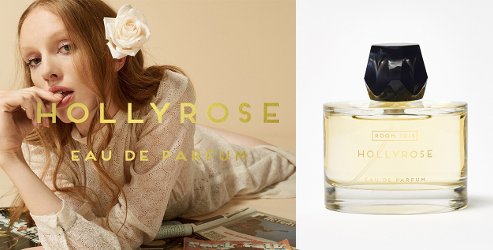 French niche line Room 1015 has launched Hollyrose, a new unisex fragrance. Hollyrose is a tribute to the "teenage groupies who ruled over Sunset Boulevard in the 70’s".

Cement flowers flout and sprout on Sunset Boulevard. Powered by the rock star fantasy, deflowered by the love of art, these young innocent ROSES become clutching vines in twisted poses. From anonymous groupie bedrooms to Hollywood backstage feats by way of their idols’ crumpled bed sheets, these ORCHID women awaken, leaving a scent of skin, night and caresses in their wake. Petals and thrills under the frills. In the dip of an ankle, like a fragrance of finely worked LEATHER, scratched with tales by the nails of guitar gods. A captivating, alienating trail without fail… Between romanticism and decadence.

Hollyrose was developed by perfumer Jérôme Epinette. Additional notes for the floral fragrance include black pepper, blackcurrant and patchouli.