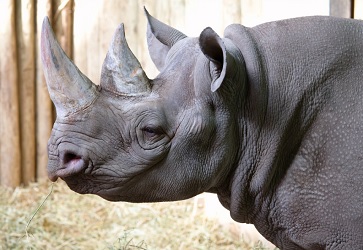 We talk endlessly about our rights but very little about our duties. I believe our most important right is the right to give; I do not believe we have the right to grab. — Anna Merz

Sometimes when I sit down to write a perfume review, more interesting things pop into my mind (and that's a relief; I often feel perfumed-out these days). As I looked at my fragrance sample of Zoologist Rhinoceros, my mind went back to 2013 when I read the New York Times obituary of a woman unknown to me: Anna Merz. After reading the obit, I felt happy and energized, and I shared the article with friends, including Robin here at NST.

Anna Merz was born in England but spent most of her life in Africa, first in Ghana and then in Kenya and South Africa. She was a successful businesswoman in Ghana and got involved in wildlife conservation, working with antelopes, monkeys, chimpanzees — and an Akun eagle owl named Heavenly Horus, who she described as one of the four "outstanding personalities" in her life (Samia, a rhino, was another, along with a chimp and one of her dogs who saved her life three times in Africa). When Merz moved to Kenya to retire in 1976, her life changed.  She noticed the disappearance and slaughter of rhinos all around her and decided to use her own money (over a million dollars) to create a sanctuary for black rhinos.

When we retired to Kenya in 1976 I very soon realized that the rhino was in serious trouble.... I believed that every one who cares about life on this planet must try and act to save it. I had some money and decided that I would use it to try to help save this animal that was the closest in my immediate neighborhood to being exterminated.*

Rhinos are killed for their horns, an expensive and rare commodity. The horns have been used as dagger handles in Yemen, and currently in Vietnam as everything from "cancer cures" to aphrodisiacs, party 'drugs' (powdered and sniffed like cocaine) and status symbols ("I'm rich enough to afford rhino horn.")  Internationally, the trade in rhino horn is banned under CITES (Convention on International Trade in Endangered Species of Fauna and Flora) but the crazed slaughter of rhinos continues (even rhinos in zoos and art objects made of rhino horn in museums are targeted). The sanctuary Merz helped found, now called the Lewa Wildlife Conservancy, has been successful in protecting its rhinos and in facilitating breeding; thanks in part to Lewa, the black rhino population has doubled since 2003.

This spring I bought and read Merz's book Rhino: At the Brink of Extinction and was thrilled it was an autographed copy (presented to a donor). The book is full of inspiring, sad (I cried), scary and hilarious stories. The abandoned baby rhino calf Merz raised by hand and lived with for 11 years (Samia) would often join Merz on walks and, as a baby, in bed. One night, Merz was home alone, soaking the day's dirt and cares away in the bathtub. When she heard doors creak and a light step approaching the bathroom, Merz yelled out in fear: "WHO IS THAT?!" In walked Samia, who had broken a barricade, unlatched a gate, and opened doors to reach her friend. Merz had to jump from the tub where Samia was about to join her. On another memorable occasion, Samia became jammed in a doorway inside the house and Merz could only dislodge her by pouring cooking oil over the huge animal and giving her a BIG shove. 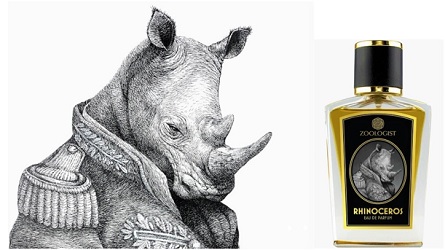 Rhinoceros goes on as a musky/smoky leather scent (with a brief shot of rum and dense citrus). Next up are herbal notes (sage, immortelle and geranium) that are joined by resinous aromas —sweet "turpentine," fresh-cut pine. The perfume ends with the scents of leather, caramelized amber, oud and smoked nougat. Rhinos love to forage in the dry lands they occupy, digging up roots, turning over logs to eat insects, munching on all types of grasses and shrubs and pulling down low tree branches with their horns. I'd describe Rhinoceros as a "civilized" rhino encounter (nice boots, leather seats in the Range Rover). What we're missing are indoles — representing the massive quantities of rhino merde and urine (more pine could have solved this one) they use to mark territory. I'd be afraid to wear any perfume on a trip through an African sanctuary...imagine those wild critics!...but if you'd like to imagine Kenya (and its colonists) a hundred years ago, Rhinoceros may appeal. I enjoy wearing it and will use it more often in cool weather.

I can't imagine Anna Merz wearing perfume; her lack of vanity is laudable (in one episode in her book she laughs about losing her glasses AND her dentures as she flees from a wild rhino she encounters accidentally).

That's not to say Merz wasn't romantic. Merz would often read Shakespeare to highly agitated, frightened, depressed and confined rhinos awaiting transport or release into the sanctuary. She also noted these animals would stop and listen intently as her husband played the piano. Merz developed true friendships with rhinos besides Samia, her favorite. Once, after a three-year separation, she encountered one of the first rhinos she had known as an individual, Morani. He was feeding far from Merz as she entered his area:

He lifted his head, pricked his ears and slowly walked towards me. As he drew near, I dropped to my knees and made the greeting breathing. He stepped nearer and then, gently avoiding touching me with his horn, pressed his nose against my face. It was enough.*

Merz's New York Times obituary includes these lines: "She left no immediate survivors but more than 70 black rhinos, including one born the day she died."

* All quotes in this post, unless otherwise noted, are from Rhino: At the Brink of Extinction by Anna Merz, HarperCollins Publishers, 1991.