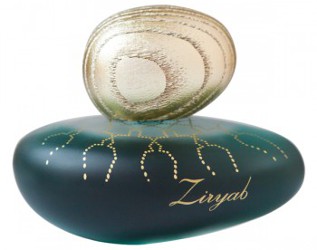 Ziryab (shown) ~ A woody amber fragrance intended as an homage to the musician and polymath of the same name. "In homage to Ziryab, the perfume is composed in five stages, as the strings of his instrument. The fifth string is an audacity, a gesture of an iconoclastic perfumer: The alliance of the tulip, this watery, transparent, green note, to the rest of the composition "wood of Oud"." Additional notes include saffron, atlas cedar and amber.

Mudéjar ~ A woody floral named for Mudéjar art and architecture. "First, it takes us through the flower garden, the freshness of the citrus makes us the heat softer (spices, wood). We stand for a moment in front of this imposing, mineral building. We seek the protection of its walls and cross its threshold. The darkness welcomes us; a ray of light illuminates the center. A wet smell mingles with the comforting fragrances of woodwork and fumigations." With grapefruit, black pepper, cassis, cedar, musk, sandalwood, frankincense and leather.

Both fragrances were developed by perfumer Richard Ibanez.

Majda Bekkali Ziryab and Mudéjar are available now at First in Fragrance in Germany, in 120 ml Eau de Parfum.