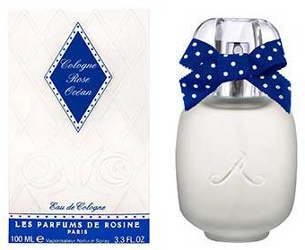 The second Cologne of LES PARFUMS DE ROSINE had to explore another facet of the freshness specific to an Eau de Cologne. The universe of great marine spaces, where the rose is there as an intruder, was a challenge. Delphine Lebeau took up the challenge and gave us a rather unusual scent.

Green notes, worked as if they were embracing the sea air, mixed with citrus scents that caught us and dragged us on rocks beaten by the waves. Then comes the delicate vivacity of a rose bud, still a little green, which mingles with the agrarian flavor of lavender. An absolute rose is there to embalm this accord.

The cedar wood and the oak moss supported by the tenacious softness of the ambroxan bring the structure and a beautiful outfit to this note, ample and vast as the ocean. The COLOGNE ROSE OCEAN is a beautiful escape to a holiday by the sea.