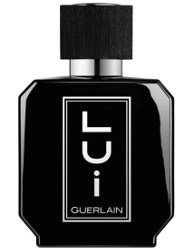 Guerlain has launched Lui, a new unisex fragrance. Lui plays on the name (and bottle design) of 1929's Liu.

Female. Male. Why choose ? He is a perfume that loves to stir up trouble. Neither totally feminine nor truly masculine, it is both at once. Guerlain is inspired by a generation that is free from the norms of the genre, and has the idea of ​​a decidedly universal perfume.*

Lui was developed by perfumers Thierry Wasser and Delphine Jelk, and centers on benzoin and carnation. Additional notes for the spicy woody floral include resins and leather.

* A possibly horrid Google translation of the original French.