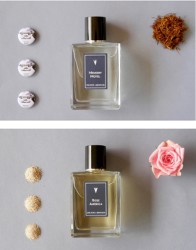 Memory Motel ~ "When Andy Warhol was planning to move near the Hamptons, he admitted to having chosen Montauk for the outdated and slightly kitsch architecture of the Memory Motel (still in operation), with its Tiki, Tudor, and very Motel 6 features. Warhol becomes an anchor point, a lighthouse for an entire generation of artists. He rented his mansion for a summer to the Rolling Stones, who were rehearsing for their tour and pre-recording what would be one of their greatest albums, ‘Black and Blue’, which included the melancholy ballad ‘Memory Motel’. This eponymous perfume is our burning tribute to those restless, turbulent times. An androgynous perfume with notes of tobacco wrapped in patchouli leaves, pierced with a touch of vanilla." Additional notes include bergamot, iris, incense, carnation moss and leather.

Rose America ~ "In ‘The Little Prince’, St-Exupery writes, “Go and see the roses again. You will understand that yours is unique in this world.” The dunes of Montauk witness the blossoming of the Rosa Rugosa, a special rose that is whipped by sea spray and exposed to the ravages of time. It becomes naturally marine, peppery and salty. Let’s close our eyes for just an instant. There is a house facing the ocean. It’s summertime. Turn the key; there is silence and darkness. The shudders open toward the light and you blink at the sun. Upstairs, the first bedrooms start to come to life. The windows open and suddenly a scent surprises you. A rosy breeze blends with the clean smell of fresh sheets. It’s the beginning of a long month of vacation and creating memories. This confident rose, an integral part of a savage landscape, is what we have tamed. If over the course of one night, the starry sky transformed into a bouquet of fifty roses ….This is how ‘Rose America’ came to be. A dream becomes a feminine perfume." Additional notes include raspberry, sea spray, carnation, heliotrope and ambrette.

(via unenuitnomade, additional information via Une Nuit Nomade at Facebook)