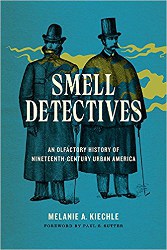 Melanie A. Kiechle is assistant professor of history at Virginia Tech.

What did nineteenth-century cities smell like? And how did odors matter in the formation of a modern environmental consciousness? Smell Detectives follows the nineteenth-century Americans who used their noses to make sense of the sanitary challenges caused by rapid urban and industrial growth. Melanie Kiechle examines nuisance complaints, medical writings, domestic advice, and myriad discussions of what constituted fresh air, and argues that nineteenth-century city dwellers, anxious about the air they breathed, attempted to create healthier cities by detecting and then mitigating the most menacing odors.

Medical theories in the nineteenth century assumed that foul odors caused disease and that overcrowded cities―filled with new and stronger stinks―were synonymous with disease and danger. But the sources of offending odors proved difficult to pinpoint. The creation of city health boards introduced new conflicts between complaining citizens and the officials in charge of the air. Smell Detectives looks at the relationship between the construction of scientific expertise, on the one hand, and "common sense"―the olfactory experiences of common people―on the other. Although the rise of germ theory revolutionized medical knowledge and ultimately undid this form of sensory knowing, Smell Detectives recovers how city residents used their sense of smell and their health concerns about foul odors to understand, adjust to, and fight against urban environmental changes.

Due for publication in July by University of Washington Press, 352 pages.

Flavor: The Science of Our Most Neglected Sense 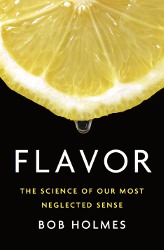 Bob Holmes is a correspondent for New Scientist and has a PhD in evolutionary biology.

Can you describe how the flavor of halibut differs from that of red snapper? How the taste of a Fuji apple differs from a Spartan? For most of us, this is a difficult task: flavor remains a vague, undeveloped concept that we don’t know enough about to describe—or appreciate—fully. In this delightful and compelling exploration of our most neglected sense, veteran science reporter Bob Holmes shows us just how much we’re missing.

Considering every angle of flavor from our neurobiology to the science and practice of modern food production, Holmes takes readers on a journey to uncover the broad range of factors that can affect our appreciation of a fine meal or an exceptional glass of wine. He peers over the shoulders of some of the most fascinating food professionals working today, from cutting-edge chefs to food engineers to mathematicians investigating the perfect combination of pizza toppings. He talks with flavor and olfactory scientists, who describe why two people can experience remarkably different sensations from the same morsel of food, and how something as seemingly unrelated as cultural heritage can actually impact our sense of smell.

Along the way, even more surprising facts are revealed: that cake tastes sweetest on white plates; that wine experts’ eyes can fool their noses; and even that language can affect our sense of taste. Flavor expands our curiosity and understanding of one of our most intimate sensations, while ultimately revealing how we can all sharpen our senses and our enjoyment of the things we taste.

Published by Norton this year, the Hardback is currently $13.49 at Amazon, 320 pages. 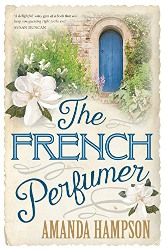 'Shorthand typist required by English speaker in the South of France. Live-in, full board plus salary commensurate with experience.'

Iris Turner, an unworldly young Englishwoman, arrives in the French Riviera to take up a secretarial role for the mysterious Hammond Brooke. Living in a small, exclusive hotel among eccentric and unpredictable aristocrats and struggling to gain her employer's trust, she soon realises that nothing is as it seems.

Initiated into the mysterious world of perfume, she finds herself entangled in a web of intrigue and deception. Gradually discovering the truth, she gains a new understanding of the meaning of love, loyalty and betrayal.

By the bestselling author of The Olive Sisters, this is a captivating and evocative novel full of surprising twists and turns.

Published by Penguin Random House Australia; in the US there is a Kindle edition published by e-penguin, currently $14.38 at Amazon. 194 pages. 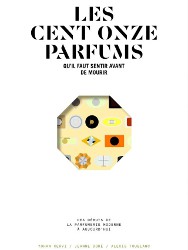 Translation: 101 perfumes to smell before you die. Written by Jeanne Doré of the French perfume blog Auparfum and the magazine Nez, along with Yohan Cervi and Alexis Toublanc. Here is a bad machine translation of the description from Auparfum, where you can also buy the book:

Far from being a simple list, this book of reference proposes a true History of perfumes, through 130 years of creation. Jeanne Doré and her team - all from the olfactory cultural movement initiated by Auparfum.com and Nez, the journal olfactive - wanted to highlight the 111 perfumes that count, whether they are leaders, celebrated or unknown, best-sellers Or disappeared.

From Jicky (1889) to Tabac tabou (2015), this selection as subjective as passionate is classified in 7 periods marking the great transformations of the industry. The texts, sensitive, curious and didactic, are addressed to experts as laymen, young amateurs as well as connoisseurs.