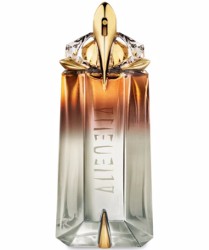 An empowering, mysterious and intoxicating musk, tinged with a profusion of colors and contrasts in a blend of arresting spices. Jasmine and cashmeran wood give ALIEN its true signature, which is enhanced by sensual notes of vanilla.

This mysterious revelation is extended by the fragrance's vibrant, impossibly rich trail. An oriental creation encapsulated in the precious jewel of a white gold-tinged TALISMAN bottle.

(quote via inter.mugler, additional information via saksfifthavenue, found via @persolaise at twitter)