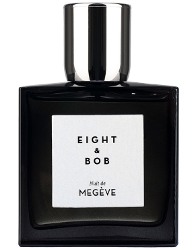 On his first day in Megève, having spent a strenuous time on the ski slopes, [Albert] Fouquet began what was going to be the most magical night he had ever dreamed about. On entering his friend’s house, there was his host together with the most beautiful woman he had ever seen. Nicolas did not delay in introducing him to Annicke, a young Austrian who was the daughter of a banker and a Hungarian noblewoman. Reflected in her face was perfection of feminine beauty. Her striking emerald green eyes and her constant smile radiated unparalleled serenity and tenderness....Albert Fouquet had the good fortune to spend the whole evening with Annicke. Hours of conversation beside the fireplace, laughter and dancing, led to a firm promise to meet again within the next few months. On his return to Paris, Fouquet wanted to hold on to his memories of that evening without forgetting any part of the magic of Megève: the smell of the mountain air and the wood burning in the fireplace, the ambience created by that select party. He knew that the best way of keeping them alive would be to transform all this into an exquisite aroma that only his extraordinary talent would be able to achieve. And so a new creation of Albert Fouquet was born: Nuit de Megève.