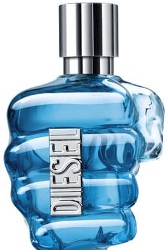 The notes for the aquatic fougère include citrus, ginger, peppermint, anise, arctic accord, lavender, moss, cashmeran and ambrextrême.

Diesel Only The Brave High is available in 50 and 75 ml Eau de Toilette.

Update: Only The Brave High is described as "fresh, light, almost breezy". It was developed by perfumers Carlos Benaïm and Nicolas Beaulieu. Additional notes include grapefruit, yuzu and geranium.