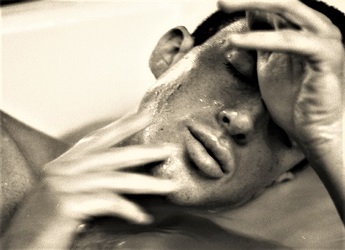 Capsule Parfums describes Brood as "old soul spice...a progressive take on ancient ceremonial fragrance." Often, in perfumers' argot, "ceremonial" means incense, and though I love incense fragrances in autumn and winter, by spring I'm getting tired of them — no more smoke or ash, please. Only Eau d'Italie Paestum Rose and L'Artisan Timbuktu remain in rotation during warm weather (and many may not consider them "true" incense fragrances). Now, a new summer-incense-y perfume has caught my attention: Capsule Parfums Brood.

Certain herbs, spices and flowers (plum comes to mind, along with other strongly-scented spring blossoms) have an light-incense vibe. Capsule Parfums has chosen wisely by including a heavy dose of spikenard (Nardostachys jatamansi) in Brood; spikenard (a relative of valerian) smells "profound" and is used in incense blends in Asia. Spikenard was used in ancient times as a food flavoring and was included in perfume recipes in Egypt, Greece, Rome and the Middle East. Spikenard is used as a drug, especially in Ayurvedic medicine and has been shown to be a strong free-radical scavenger — showing protective properties against radiation. Spikenard grows at high elevations in the Himalayas and is endangered due to over-harvesting (projects to produce sustainable spikenard are ongoing in Nepal).

Though "brood" means to "think deeply" and "to ponder," Capsule Brood makes me feel happy...and a little hungry. 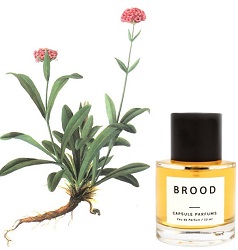 Brood goes on smelling peppery with hints of old-style patchouli and vanilla. Quickly the scent of tangy/green (almost chive-y), rooty/vegetal, earthy spikenard makes itself known (it's a complex aroma). A wonderful musky, overripe fruit note appears, too. Spikenard remains in the forefront as Brood develops and either becomes a bit minty or is joined by mint; a sheer vanillic note casts a semi-sweet haze over Brood's dry-down. Brood has good sillage and lasting power.

Spikenard would mix well with many notes: galbanum, mint, vetiver (another root-y scent), cedar and moss (all those notes seem part of spikenard's genetic composition). Smelling spikenard in Brood makes me want to taste it, so I may investigate including spikenard in a savory sorbet (in place of mint or lavender), a tomato chutney or vegetable curry. In the right hands and amount, spikenard would also add distinction to a strong cocktail.