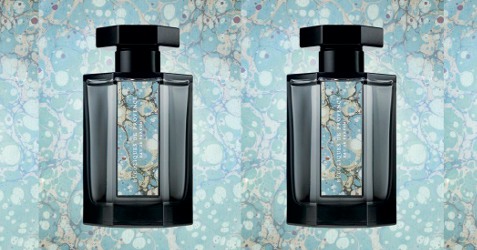 Bucoliques de Provence, which launched this past spring, is the first fragrance in a projected series inspired by the different regions of France, and was the first to sport L'Artisan's latest packaging design.1 It sounded awfully nice:

This perfume pays homage to the history of Grasse. Perfumery in this region with its distinctive lavender fields, dates back to the 17th century and is linked to the historic production of leather. The perfumer has combined lavender and leather with iris and spices creating a soft, faceted scent. Bucoliques de Provence is modern in its pure and naturalistic approach.

I think it's the first L'Artisan fragrance from perfumer Fabrice Pellegrin? (And I did love L'Artisan's last "regular" release, Noir Exquis, which seems like five gajillion perfumes ago, but was really just last year.) So I dutifully wrote Bucoliques de Provence on my to-try list, then went right ahead and promptly ignored it for the better part of the year.

Ah, but I should have gotten to it sooner. It lives up to its description and then some: it's soft, yes, but it's not without heft or warmth, and it would fit easily into any list of lavender or iris fragrances you'd like to make (I'd place it in iris fragrances for fall). The opening is just enough sharp lavender — I did not used to like my lavender sharp, but now that it's very nearly endangered in perfumery,2 I've come to appreciate it in small doses — with just enough of an aromatic / herbal bite, brightened with a little citrus. The sharpness fades as Bucoliques nestles itself into a cloud of iris, with a few flower petals strewn here and there. The leather, a nod to the Grasse tradition of scenting leather gloves, is done here more like a pale suede, and the whole thing manages to remind me of both a floral-tinged cosmetic powder and the outdoors, near fields and flowers, on a warm day. It is, as advertised, completely unisex.

Verdict: I do not pretend to understand what L'Artisan Parfumeur is up to in terms of their efforts to reposition themselves in the fragrance market, but when fragrances like Penhaligon's The Revenge of Lady Blanche get more attention (and I suspect better sales) than Bucoliques, I can't think they're accomplishing whatever it is they intend.3 So I need to remind myself every so often that the scents are still good and the pricing is still mostly reasonable. If only L'Artisan were still selling 15 ml bottles (go ahead and roll your eyes, I know I've repeated it ad nauseam) I'd have bought Bucoliques (and Noir Exquis, and Séville à l’Aube) already. For now, it goes on the buy-list, where it will no doubt linger for all eternity.

If anyone has tried any of the Natura Fabularis series, do comment!

1. When I announced the packaging change earlier this year, reader Cries and whispers noted that "it’s lost its original retro bohemian chic identity", and I think that's exactly right. That does not look like a bottle in which you are likely to discover fun. It seems just as well that Ananas Fizz and Jacinthe des Bois are gone; they do not belong in that bottle.

2. By which I mean not that the natural component is endangered, but that most perfumes with lavender these days use molecular fractions that are so soft and smooth, they barely recall the actual flower.

3. I pick on Penhaligon's only because the two brands have been under the same ownership for some years now. When I started out as a perfumista, from my perspective, Penhaligon's was a traditional, somewhat stuffy British toiletries brand and L'Artisan was a venerable yet playful niche French brand with a regular cycle of new releases, many of them (like the yearly summer limited editions) great fun. Translation — I do not own a single Penhaligon's fragrance (and they just discontinued the only one I wanted); there is an entire section of my cabinet devoted to L'Artisan. But in terms of branding, the two brands now seem very nearly reversed from how they started. As minimal and entirely random evidence of how differently they are marketed, I offer up this snazzy video from Penhaligon's and this snoozer from L'Artisan.