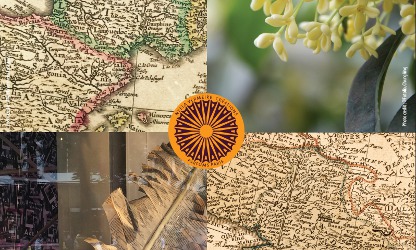 French niche line Neela Vermeire Créations will launch Rahele, the brand's sixth fragrance. Rahele is intended as an "ode to exotic travel", and was inspired by three Frenchmen who traveled to India during the 17th century.

Tavernier...Bernier...Thévenot...the names still resonate in the imagination of armchair travellers today, as each man left a detailed record of his adventures, showing us Mughal-ruled India through a European lens.

Jean-Baptiste Tavernier (1605-1689) was a French jeweller of Belgian descent, an independently wealthy gem merchant who funded his own travels to the East, particularly to India. His book Les six voyages is still considered an important point of reference by historians. His trade in precious stones and pearls took him to the court during the construction of the Taj Mahal. On one of his voyages, Tavernier bought a gigantic blue diamond in Golconda which he subsequently sold to the Sun King, Louis XIV. The Tavernier diamond, or French Blue as it came to be called, was a centrepiece in the French crown jewels. According to legend, the precious stone was stolen during the French Revolution, only to turn up many years later in London, recut as the Hope diamond.

Francois Bernier (1620–1688) was physician to the eldest son of Shah Jahan and, more widely, to the court during his 12-year stay in India. He saw various rulers, was an astute social observer and contributed greatly to the understanding of court life and life in India generally through his book Travels in the Mughal Empire, AD 1656-1668.

The third traveller, Jean Thévenot (1633-1667), was a linguist and botanist. The travels of Monsieur Thévenot into the Levant describes in detail his observations during his travels. This book was the first part of his Voyages and was published while he was alive. The other two parts of Thévenot’s Voyages were published posthumously.

Rahele is truly an East meets West composition, centred around Osmanthus - melding the woods and spices of India with herbal and floral essences of classical French perfumery.