A few more new and upcoming perfume books for 2016: Chanel, The Art of Creating Fragrance: Flowers of the French Riviera by Lionel Paillès; Sacred Scents in Early Christianity and Islam by Mary Thurlkill; and The Secret Ways of Perfume by Cristina Caboni.

Also new: a paperback version of Jean-Claude Ellena's The Alchemy of Scent (due in October) and an audiobook of Aphrodesia by John Oehler (available through Amazon or Audible).

The Art of Creating Fragrance: Flowers of the French Riviera 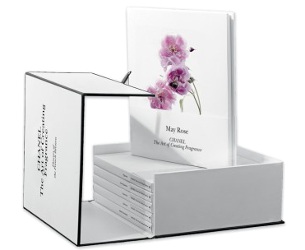 Chanel No. 5 has been made with flowers from the same picturesque patch of land between the Alps and the Mediterranean, known as the Pégomas Valley, since the perfume was created in 1921. Every year hundreds of pounds of flowers are cultivated, picked, and distilled, following secret traditions. For the first time, the artisanal techniques used to create the world’s most coveted perfumes are revealed. The six-volume collection contains a book on each of the main five flowers from which all Chanel perfumes are made—centifolia rose, iris, jasmine, geranium, and tuberose—with the first book profiling the creators and detailing the process. This beautiful and lavish gift set offers a fascinating look into the storied brand of Chanel and the art of making perfume. 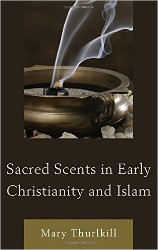 The author, Mary Thurlkill, is associate professor of religious studies at the University of Mississippi.

Medieval scholars and cultural historians have recently turned their attention to the question of “smells” and what olfactory sensations reveal about society in general and holiness in particular. Sacred Scents in Early Christianity and Islam contributes to that conversation, explaining how early Christians and Muslims linked the “sweet smell of sanctity” with ideals of the body and sexuality; created boundaries and sacred space; and imagined their emerging communal identity. Most importantly, scent—itself transgressive and difficult to control—signaled transition and transformation between categories of meaning.

Christian and Islamic authors distinguished their own fragrant ethical and theological ideals against the stench of oppositional heresy and moral depravity. Orthodox Christians ridiculed their ‘stinking’ Arian neighbors, and Muslims denounced the ‘reeking’ corruption of Umayyad and Abbasid decadence. Through the mouths of saints and prophets, patriarchal authors labeled perfumed women as existential threats to vulnerable men and consigned them to enclosed, private space for their protection as well as society’s. At the same time, theologians praised both men and women who purified and transformed their bodies into aromatic offerings to God. Both Christian and Muslim pilgrims venerated sainted men and women with perfumed offerings at tombstones; indeed, Christians and Muslims often worshipped together, honoring common heroes such as Abraham, Moses, and Jonah.

Sacred Scents begins by surveying aroma’s quotidian functions in Roman and pre-Islamic cultural milieus within homes, temples, poetry, kitchens, and medicines. Existing scholarship tends to frame ‘scent’ as something available only to the wealthy or elite; however, perfumes, spices, and incense wafted through the lives of most early Christians and Muslims. It ends by examining both traditions’ views of Paradise, identified as the archetypal Garden and source of all perfumes and sweet smells. Both Christian and Islamic texts explain Adam and Eve’s profound grief at losing access to these heavenly aromas and celebrate God’s mercy in allowing earthly remembrances. Sacred scent thus prompts humanity’s grief for what was lost and the yearning for paradisiacal transformation still to come.

Published by Lexington Books, 212 pages, currently $85 for Hardcover or $68 for Kindle edition at Amazon.

The Secret Ways of Perfume 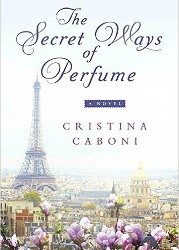 A novel by Cristina Caboni.

Elena Rossini has a rare gift: She has the ability to decipher the ingredients of a perfume from its scent alone. Passed down through generations of her family, Elena’s ability delights as easily as it overwhelms, especially when she catches a scent in the air that evokes painful memories of her mother. For so long, Elena has avoided the world that was her past.

But when a betrayal destroys her dreams for the future, her best friend lures her from Florence to Paris. There, Elena finds that when she is wrapped in the essences of flowers, herbs, and spices, she doesn’t feel quite so alone. Once again immersed in the ancient craft of perfumery, Elena searches for a celebrated family recipe that no perfumer has been able to replicate.

And as she opens herself up to secret scents and distant memories, Elena discovers the very essence of the woman she could become...

Published by Berkley, Paperback 400 pages, about $9 at Amazon.