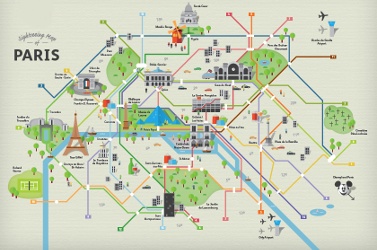 It’s a cliche: smell evokes memory. As profoundly as I know this, it’s something I forget until confronted with a scent that brings back a past world. The smell of warm, dry pine needles reminds me of growing up in rural Northern California. On boarding an airplane, it only takes a whiff of its fetid warmth to call up the hum of jet engines to come. I forget all about the satisfaction of a bowl of spaghetti until I get a hit of oregano, tomatoes and steamy pasta water.

For the past four years, I’ve been lucky enough to housesit for a Parisian friend in August. Yesterday I stumbled, zombie-like, from a seemingly endless flight into the RER, and an inhale later, it was as if I’d never left Paris. I breathed in the train’s sweet, rubbery air, and — poof! — I saw the painted-over hinges of the French windows in my friend’s apartment, the view of the corner florist from her guest room window, and the apartment's recorded elevator lady saying, “Rez-de-chaussée.”

If you read this the day it’s posted, there’s so much more I hope to have smelled in the intervening 24 hours: a ripe Charentais melon; thin but still rich coffee (hey, Portland’s coffee is hard to beat) and probably too much of it in an attempt to cheat jet lag; perfume on the street (ladies, it’s time to move on from La Vie est Belle); warm limestone walls; maybe the stone and incense of a church; definitely more métro.

This week, I’ll report every day on some of smells I encounter in Paris. Some of you are on vacation, too. What smells are you breathing? I’m imagining lakes, the ocean, rosy hotel lobby air, horses, barbecue smoke, and so much more.