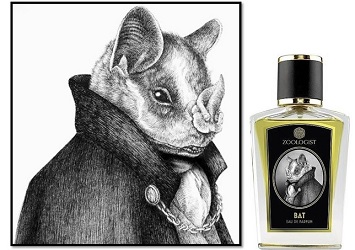 Mystical, mysterious murmurings glide upon a blanket of inky sky. Shadows smear across the moonlight, their darting journey shrouded in darkness. Bats, the only mammal capable of true flight, are enigmatic and alien.

Toronto-based indie perfume company Zoologist came to my attention at Tigerlily Perfumery in San Francisco last weekend. Being an animal lover, how could I resist a line inspired by bats, pandas, hummingbirds, rhinoceroses and beavers!? (Answer: I couldn't.)

Zoologist does not aim to capture just an animal's own scent, but the scents of its environment and diet. Thus, Bat is composed of "soft fruits, damp earth and minerals."1 Bat was developed by Ellen Covey, owner/perfumer at Olympic Orchids Perfumes, professor at the University of Washington and orchid specialist. Covey wanted Bat to smell like "the cool, earthy, damp limestone cave where the bats live, the fruit that they eat, and the clean, musky smell of their fur." She succeeded with me and apparently others, too; Bat won the Independent Category of the 2016 Art and Olfaction Awards.

Bat starts by presenting the bat's damp cave, with tough/rough mineral notes and scents reminiscent of fuzzy mint and damp soil. Next up are sticky, ripe fruits (star fruit and pineapple come to mind). As the fragrance develops, I smell myrrh, tonka bean, sweet fruit skins (figgy) and a mossy note. I really liked the fact that Bat's "cave" made a reappearance during the course of wear, it never disappeared. On its second appearance, the cave smelled a bit medicinal, camphor-tinged and "cool." For those wondering: I don't detect realistic "fresh" banana in Bat; the banana smells like a silky, mottled gold-and-dark-brown banana skin. Bat's base smells of sheerest sandalwood-vetiver — our bat has now left the wilds, donned his cloak and is hanging (out) in a parlor. I was wondering where the "furry musks" were till six hours in (!) when they make their appearance. I've never smelled bat fur but Bat's musk smells somewhat like clean hound dog with a touch of apricot-scented talc behind each ear (a novel aroma).

When I smelled Bat sprayed onto a paper strip, I thought: "GREAT! But...I can't wear it. It's a novelty perfume."  I was wrong; on skin, Bat is very wearable, if unconventional, and it lasts all day. 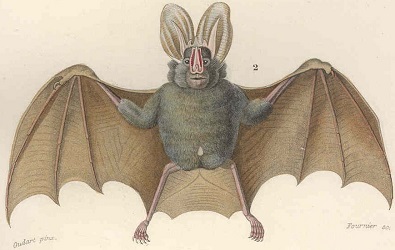 When asked by Zoologist's founder Victor Wong what other animals are ripe for their own perfume, Covey answered:

I vote for cicada (with a Japanese "flavor"...I can see Lady Cicada now in a kimono on the bottle) and "southern U.S." bullfrog (an old friend from my childhood days spent hanging out at a secluded mill pond).

Bat has whet my appetite for trying the other perfumes in the Zoologist line; my assignment — getting the sample set ($25). Please comment if you've smelled other perfumes from this line.

Zoologist Bat is $125 for 60 ml Eau de Parfum. It is available at the Zoologist website, or at Indiescents.