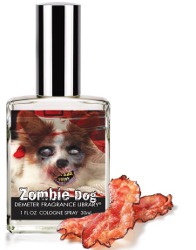 Demeter has launched Zombie Dog, a limited edition fragrance that is being released along with reissues of Zombie for Her and Zombie for Him:

Just because you’re dead, doesn’t mean you have to smell bad. And now, neither does Man's Best Friend, Zombie Dog!

Zombie Dog is more than Death and Decay on the forest floor. Yes, we have the standard Zombie combination of dead and dying vegetation, mushrooms, mildew, moss and earth. But Zombie Dog, Man's Best Friend, deserves something more, so much more... SMOKED BACON!

Zombie Dog is not intended for use on pets