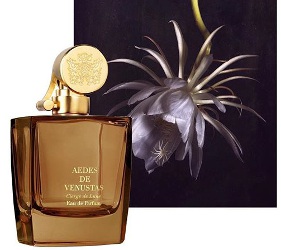 Cool and limpid as moonlit desert air. Velvety and sensuous as the midnight sky… Inspired by the scent of the mysterious night blooming cereus, also known as the Queen of the Night, AEDES DE VENUSTAS’ sixth offering unveils the dark side of vanilla.

The French call it cierge de lune – “moon altar candle”, a literal translation of the Latin Selenicereus grandiflorus. Since its spectacular flower only opens after dark and wilts as the sun rises, the New World cactus species is also known as night-blooming cereus or queen of the night… It is said that Queen Marie Antoinette summoned the botanical artist Pierre-Joseph Redouté at midnight to capture its poignantly fleeting beauty. Today, Karl Bradl and the perfumer Fabrice Pellegrin capture the suave scent of this glamorous, elusive muse.

[...] Inspired by the fragrance of the night-blooming cereus – spicy vanilla laced with wisps of incense -- Fabrice Pellegrin unveils the dark side of vanilla with an outstanding Madagascan absolute. Woodier and more ambery than its Tahitian counterpart with a tinge of tawny leather, it forms the heart of the composition. An airy waft of hedione transmutes the delectable pod into a cactus blossom, its pristine petals fleshed out by ylang-ylang.

To add vibrancy and brightness, twinkling pink pepper shoots glints of moonlight into the velvety blend, while black pepper runs an intriguing thread, from mineral, incense-like effects – a nod to the olfactory theme of AEDES DE VENUSTAS’ first offerings – to resinous, smoky, dark chocolate notes… Then, in a final metamorphosis, musky Ambrox, underscored by a downy suede accord, turns the nocturnal bloom into a dusky second skin…

Aedes de Venustas Cierge de Lune will debut in April, and will be available in 100 ml Eau de Parfum, $245.