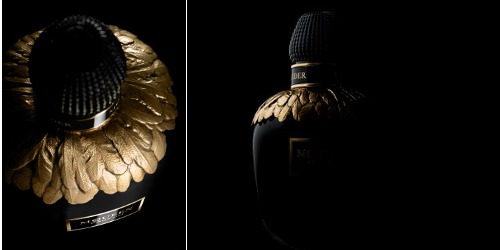 Alexander McQueen will launch McQueen Parfum, a new fragrance for women, next month. It is the brand's first release since 2007's MyQueen Light Mist. McQueen passed away in 2010.

McQueen has created a unique scent, one that gives strength to your imagination. It is made from the precious essence of three night-blooming flowers, a parfum that unfolds the mysterious power in you. Uniquely McQueen.

The notes include jasmine, tuberose and ylang ylang; the gold-feathered bottle is described as "a poem in glass".

I will update with sizes and concentration when I can. (And if you missed the video, it is here.)

Update: The McQueen Parfum will debut at Harrods in March, €350 for 50 ml Extrait de Parfum. It will be in limited distribution overall (50 doors in 2016). A lower priced Eau de Parfum in different packaging is expected to launch this summer. In addition to the jasmine, tuberose and ylang-ylang, there are also notes of clove, pink pepper, black pepper and vetiver. (via wwd) 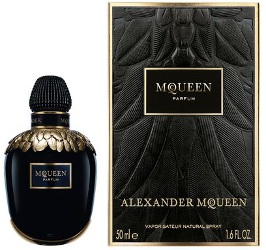