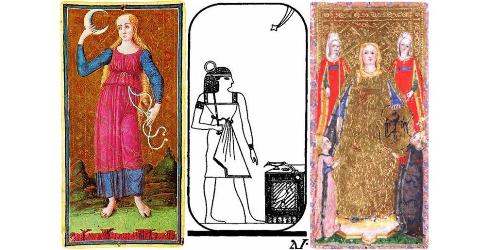 Last week at work, a friend and I were discussing an acquaintance of mine in Russia: a "seer." I had been introduced to the seer last summer by someone who swore by her talents and "influence," even from far away. I was feeling some unwanted (and uncomfortable) sway, so my friend and I took a walk in Little Saigon. As I was vividly imagining the seer forgetting all about my existence, a woman approached me on the street and screamed in my ear: "YOU BELONG TO ME!" Her hateful shriek made my head go momentarily numb on the side that faced her. Back at work, my friend and I, feeling a bit incredulous and shaken, discussed witches, amulets, tarot cards and runes, and I Googled a famous psychic from Seattle who I had met ages ago...to find that she had died in 2013. When I got home that same day, on my porch was a package from Louisiana sent by a perfume company called MojoMagique; it was filled with fragrances called Magique, VooDooChild, PixieRose and...SEER.1 Guess which one I opened and tried first?

MojoMagique Seer goes on smelling grassy-green, but sweet; its opening reminds me of an old-fashioned men's cologne from the '60s. (Since I've been talking about seers and such, I guess I should specify the NINETEEN-sixties). For a minute or so, Seer begins to toss one note after another into the air: a floral bit here, some smooth/warm woods there, a touch of saffron, evergreen, clove. Then...something great happens; Seer conjures a wonderful scent memory for me.

In the Tidewater region of Virginia (all round the Chesapeake Bay) people have, for centuries, created trails, roads and garden paths using oyster and clam shells. These paths gleam in the sun as the glassy inner shells shine, and I love the crunch of driving over or walking on an oyster-shell lane or walkway. Best of all (and what Seer reproduces): the pungent "marsh mud," mineral, sea smell of these shells — salty/sandy with a twang of fleshy musk. Seer's base smells of spicy woods, with hints of the "shell" accord I love so much.

The day after I received Seer in the mail, I told my friend at work about it and she said: "It came to you at the right moment...a positive development in an otherwise worrisome day!" Dare I say Seer is almost "magical?"