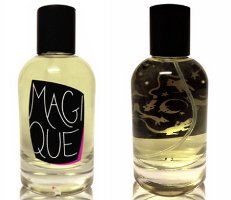 Magique is the debut fragrance from Louisiana-based apparel and accessories company Mojo:

Growing up on the bayous of Louisiana, twin brothers John and Doug Kennedy were surrounded by that region’s natural splendor. Its mysterious beauty inspired many design elements of Mojo, the apparel and accessories company they started together in 1989. Mojo Magique, their new unisex fragrance composed by IFF perfumer Jean-Marc Chaillan...expresses and extends the brothers’ sensibility into the realm of perfume.

As dramatic and multilayered as the region itself, Mojo Magique, a fresh woody floral, awakens with a burst of citrus, followed by fresh florals, a warm fig note, and an enticing drydown of spiced woods.

Mojo Magique is available in 100 ml Eau de Toilette, $100, and can be purchased at the brand website.