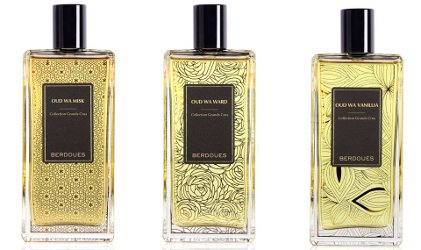 Oud Wa Misk (above left) ~ "The millésime Oud Wa Misk unveils an animal and intimate note of Oud of Thailand, mingled with the sweetness of a musky note. Ours perfumers have given birth to a mysterious, deep, and distinguished blend."

Oud Wa Ward  (above center) ~ "The millésime OUD WA WARD reveals the power of the Oud of Thailand and the sensuality of the Rose of Turkey. Ours perfumers have created a chemistry between completely opposed ingredients that yet reveals a sensual and precious harmony."

Oud Wa Vanillia (above right) ~"The millésime Oud Wa Vanilla carries in it the character of the Oud of Thailand and the warmth of the Vanilla of Madagascar. Ours perfumers have given birth to a powerful and captivating blend with heavily wooded and amber accents."

Berdoues Oud Wa Misk, Oud Wa Ward and Oud Wa Vanillia can be found now at Jovoy Paris in France, €125 each for 100 ml.