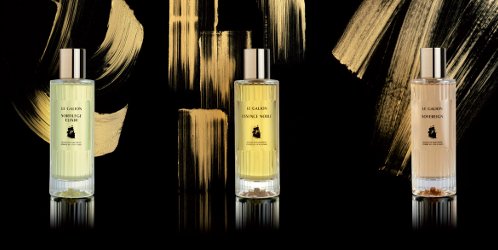 Sortilége Elixir ~ "The first fragrance created by Paul Vacher in 1936, “Sortilege” became the icon of the House Le Galion, worn by women across the globe, including Marilyn Monroe, in 1950 whilst appearing in ‘All about Eve’. For this new incarnation, the floral citrus so clearly present in Sortilege has been enhanced, with an injection of Citrus, Rose and Jasmine. The result is a strengthened vibrancy of all the floral notes. More intense, more concentrated, it’s an Elixir."

Essence Noble ~ "The house of Le Galion presents “Essence Noble”created on the base of l’Eau Noble, the last emblematic fragrance created by Paul Vacher in 1972. To emphasise both depth and strength, the head and base notes have been accentuated. The citrus opening includes Green Mandarin and has increased Lemon. This fresh start pervades all the way into the base notes where the existing Patchouli and Cedar woods continue to mingle with additional leathery Cyprus. It has also been strengthened by the addition of Moss, Sage and Styrax. As a result the leathery notes, the essence of this perfume, display their full dimensions."

Sovereign ~ "From the end of the 19th century into the 20th, travellers continued to explore the North African shores and the near and Middle Eastern regions. Memories, immortalized today in paintings and literature, show views of the region through western eyes, and fragrances of the time captured this too. Exotic oriental elements found their way into numerous fragrances, just as Prince Murat was contemplating creating Le Galion. Launched in 1930 and celebrating its 85th anniversary Le Galion, is proud to present Sovereign, in tribute to its founder. A spicy oriental amber fragrance, it opens on spicy notes of Pink Berries and Black Pepper, developing a bouquet of Rose, Iris, Myrrh, in balance with Amber, Patchouli, and a a variety of woods like Oudh, Cedar and Guaiac."