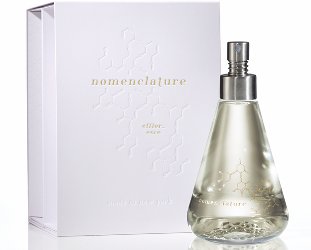 While natural essences bask in the limelight, synthetics are the clandestine infiltrators that spark off fragrant revolutions. It was the discovery of coumarin that yielded the first modern perfume, Fougère Royale, in 1881. Aldehydes lent their abstract sheen to Chanel N°5. Ethyl-vanillin enhanced Shalimar ’s plush cleavage. Hedione ® breathed its radiance into Eau Sauvage. And no contemporary scent could do without synthetic musk or the ubiquitous Iso E Super.

Whether they imitate nature, tease out its innermost secrets or veer off into botanically impossible smells, synthetics are the true building blocks of perfumery. Elegant solutions discovered by scientists, wafting from labs onto skin and into your nose. Nomenclature celebrates design in perfume chemistry by showcasing today’s most inspiring, exclusive molecules—so exclusive that some, known as “captives,” are zealously guarded by fragrance companies.

adr_ett ~ (Helvetolide) "Part of the latest generation of synthetic musks (the oldest one goes back to 1888), Helvetolide® is particularly valued for its delectable pear note, reminiscent of ambrette, a vegetal musk extracted from hibiscus seeds. [...] Helvetolide® gives off a softly enveloping, long-lasting aura; an otherworldly feeling of stillness and weightlessness. Rather than using Helvetolide® in a “classic” way to enhance other notes, [perfumer] Frank Voelkl boosts its ethereal vibe in a futuristic composition that seems to conjure the scent of zero gravity. A pink pepper comet brings out its fruitiness. Cool, metallic iris underlines its affinities with ambrette (which has an iris facet). A nebula of vanilla, tonka bean and ambergris underline its sensuousness. In German, adrett means “neat” or “dapper”: in this spare, smartly trimmed scent, each element is essential – as it would be in outer space."

efflor_esce ~ (Paradisone) "Ever since it infused Edmond Roudnitska’s groundbreaking Eau Sauvage with its citrus-tinged, floral airiness, Hedione®, an analogue of a compound naturally present in jasmine, has been one of the most widely-used materials in perfumery. Paradisone®, a captive molecule patented in 1996 by Firmenich, is its purest, most precious and most powerful expression. [...] In the astonishingly radiant efflor_esce, Frank Voelkl blows its heavenly breeze over an edenic Sicilian orchard. Touched by the luminous soul of jasmine, the fruit, leaves, twigs and blossoms of the orange tree unfurl their heady, sun-gorged scents. Bergamot adds its peppery sparkle; osmanthus, the yielding velvet of its apricot and suede flesh; tuberose, its narcotic sillage. This is nature, but better: Paradise found."

iri_del ~ (Iris aldehyde) "With its cucumber-cool, earthy, slightly skin-like facets contrasting with bright, clean, lined-dried linen effects, this modern, powerful organic compound comes as close as you can get to orris butter without tearing an iris field out by its roots and waiting six years for it to yield its fragrance. [...] In iri_del, [perfumer] Patricia Choux gives iris a contemporary twist by blowing off its aristocratic powdered wig and dressing it up in a slim, sharply-tailored suit. Bolstered by iris concrete and irone alpha (the main molecule of the natural ingredient), the iris accord is stretched over an angular structure of crackling woody-ambery notes. Bergamot and ambrette – a vegetal musk with crystalline rose, pear and iris facets – shed their radiance on the trim, dry blend. This is iris gone urban: spare, fierce and sexy."

orb_ital ~ (Orbitone) "It softens other materials, appeases tensions between musk, woody and floral notes, and makes perfume blends light as clouds… Since the early 1990s, “the transparent woody-ambery odor of Iso E Super has shaped and defined modern perfumery like hardly any other material”, writes the fragrance chemist Philip Kraft. With Orbitone®, Takasago offers a sophisticated, surprisingly textured version of this indispensable molecule. [...] Orbits are the result of a perfect balance between momentum and gravity. And in orb_ital, Patricia Choux has brilliantly used the balancing qualities of her star molecule to create a new fragrant planetary system. Violet and rhubarb; pepper, cedar and roast coffee; tobacco, smoke, and a whiff of struck match… Of the many facets spinning around Orbitone® the perfumer has picked pepper as the main force of attraction. The spice’s cool-hot burn acts from top to base notes in orb_ital, exerting its pull on a creamy sandalwood compound, Takasago’s Hindinol, anchored by sacred olibanum."

Nomenclature adr_ett, efflor_esce, iri_del and orb_ital are $165 each for 100 ml. They can be found now at Aedes, or coming soon to Skins Amsterdam and Profumo Milano.