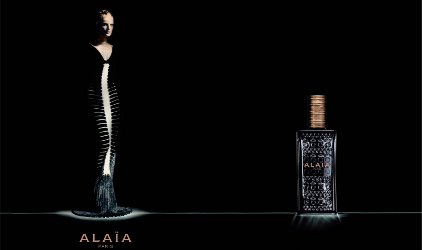 Azzedine Alaïa joins a long list of designers (and other entities) who entered my radar only via perfume. I know close to nothing about his fashion, and given how rarely the fashion really turns out to inform the juice, I did not bother to investigate before smelling the new Alaïa Paris. Despite the gorgeous bottle, my expectations were low; as I said when I announced the launch, the notes (pink pepper, freesia, peony, animalic notes and musk) sounded pretty meh, although there is a nice romantic ring to the childhood memory that reportedly inspired the fragrance's development: his grandmother throwing cold water on sun-scorched walls in Tunisia, where Alaïa lived until he went off to Paris as a teenager (he is now 75).

You'll find that steaming blend of water and chalk mostly in the top notes, which read as a special effect more than as individual notes — on skin, it's fresh, airy, mineral, peppery, warm, all at once. On paper, a chilled watery citrus aspect is more noticeable than on skin, and the pepper seems even more dominant. Mr. Alaïa reportedly did not want to smell any ingredients individually, and in particular, he didn't want to recognize any flowers, and he wanted nothing 'oriental'.1 For the most part, he got his wish. The heart has a transparent floral character but doesn't smell like any flower in nature,2 and the base is a likewise abstract musky ambery woods, warmish but not at all heavy, with a slight but lingering mineral undertone. There's something vaguely sour and fruity in the mix, and it bothered me on some wearings but I hardly noticed it on others. Anyway, it's all reasonably close to the PR description of "animal and musky notes...like a second skin".3

Verdict: An impressive debut, and quite nicely done by perfumer Marie Salamagne. It's decisively modern, but not at all outré or hard to wear, and it has a kind of gravitas that sets it apart from your average youth-oriented designer launch. It did not quite melt my heart, but I predict many perfumistas will find it attractive, and it would make a great no-brainer scent for those days when you want to smell good but don't necessarily want to make any big statement with your perfume (or even to think too hard about what to wear). Very much worth a try.

Bonus: good lasting power, and the bottle is even better looking in person than it is in pictures. Please, for the first flanker, can we have that same opaque bottle in another color?

Advance notice: I have a 100 ml bottle to give away, so look for a contest later in the week.

2. Although I think that's usually true of freesia and peony in perfume: they are identifiable only if you've smelled them in perfume over and over.

3. Old school perfumistas won't find it even slightly animalic in the traditional sense, but still, it's musky and ambery, so close enough. Quote via Saks Fifth Avenue.