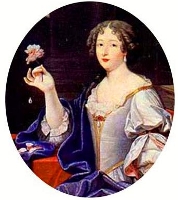 On May 14, 1664, during the famous seven-day party called Les Plaisirs de l’Ile Enchantée that celebrated the inauguration of Louis XIV’s grand Versailles building project, the “scents of ambergris, rosewater and jasmine melded with the acrid fumes of gunpowder as fireworks swooped great arabesques of intertwining ‘Ls’ across the sky for Louise and her lover, King Louis XIV of France.”* Louise was Louise de La Vallière (1644-1710), the provincial, blond and blue-eyed, rather “simple” 20-year-old mistress of Louis XIV — and the inspiration for Cire Trudon’s Mademoiselle de La Vallière candle. Louise became Louis’ mistress in 1661, and she was eventually given the titles of Duchesse de Vaujours and maîtresse en titre; she bore the king four children.

The Cire Trudon candle works was founded in Paris in 1643 (just a year before the Versailles fête) and provided candles to the court of Louis XIV (and still provides candles — and candle-making expertise — to churches like the Église Saint-Roch in Paris and companies such as Hermès, Cartier, Dior, and Guerlain).

The creative force behind Cire Trudon’s perfumed candles is Ramdane Touhami who says, “Cire Trudon does not make perfumes, but creates smells". It’s rare that I come across an entire line of perfumes, soaps, or candles and think: “I want EVERYTHING!” but that’s how I felt when I smelled the Cire Trudon line of candles at Barneys New York. Before I realized it, I had $225 worth of candles in my hands (three candles). I ended up buying only what I “needed” for my home — one candle for the guest bedroom. I chose Mademoiselle de La Vallière.

Since Cire Trudon aims to re-create the smells of places (the moon!, cloisters, Cuba, Versailles and an Indian apothecary to name just a few), I wondered what aromas would be used to represent Mademoiselle de La Vallière — a woman I had read about in Lisa Hilton’s interesting book Athénaïs: The Life of Louis XIV’s Mistress, The Real Queen of France. Athénaïs de Montespan, Louise de La Vallière’s successor in Louis XIV’s bed, said cruel things about Louise; Athénaïs made fun of Louise’s timidity and even her limp (one leg was shorter than the other), called Louise a dullard, a simpleton, and said Louise didn’t love her children enough. But what of the scents of Louise’s realm?

Hilton describes 17th century Paris as “the dirtiest city in France, and probably in Europe; it could be smelled from two miles outside the city gates….” Perfumes were used to make life more bearable and to stifle gags…and worse…as one encountered the foul smells of the city. Madame de Sévigné described Louise as “The Dew”…“that little violet which hid itself under the grass….”* Since Cire Trudon mentions tuberose above all other notes in the Mademoiselle de La Vallière candle, it was funny to come across a reference to tuberoses and Louise in Hilton’s book. While in labor with Louis’ illegitimate child, Louise was “accidentally” seen by the Queen who asked disingenuously why Louise looked so pale. Louise blamed her appearance and queasiness on the powerfully scented tuberoses in her room. (The Queen left the apartment and Louise’s baby was delivered and whisked away before the Queen would notice it.) There is no ‘violet’ or ‘dew’ in the Mademoiselle de La Vallière candle, no rosewater or ambergris or gunpowder either — the heady aroma arising from the hot wax smells like the scents you’d encounter when entering a cold, marble room in winter and being surprised by the smells of fresh-cut branches and fragrant bouquets of spring and summer flowers brought in from greenhouses. The fragrance is “startling” and wonderful with its mix of vibrant “green” galbanum and its saucy bouquet of tuberoses, jasmine and orange blossoms (other notes include bergamot, ylang-ylang, musk, cistus and benzoin). The garden-loving Louise would be pleased.

What happened to the abandoned Louise? She retreated to a Carmelite convent in the Rue St. Jacques, Paris, in 1674, used up at age 30, and became Sister Louise de la Miséricorde. Sister Louise lived the rest of her life, 36 more years, in the convent — shoeless, mostly silent and living off alms. (Smell the Cire Trudon Carmélite candle for a hint of damp, mossy convent walls.)

Cire Trudon candles are contained in heavy green-amber Italian glass tumblers and are made with vegetal wax that contains no petrochemicals or heavy metals (the wicks are cotton). The candles burn cleanly for 70-80 hours and have excellent throw.