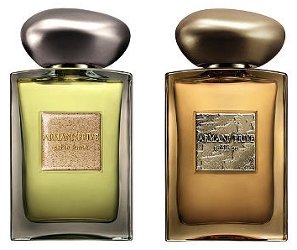 Armani Privé Sable Or ~ "Giorgio Armani’s Limited Edition Sable Or eau de parfum is imbued with the warmth of the sun. Enhanced by subdued vanilla, this butter-sand harmony is laced with a refreshing note of crisp violet and traditional bronzed sandalwood." Additional notes include iris, benzoin and tonka bean.

Armani Privé Sable Fumé and Sable Or can be found now at Selfridges in the UK, £550 each for 100 ml Eau de Parfum.

(via selfridges, additional information via parfuma)