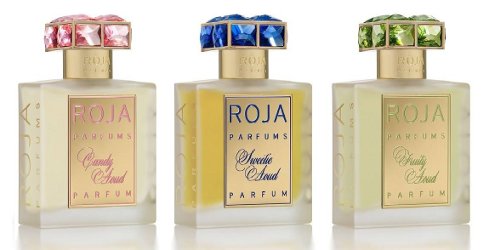 "Tasty, Tempting, Tantalising…..Tutti Frutti - I first fell in love with Aoud when I was working in the Middle East -exploring the fragrances of the region and peoples responses to them. I discovered that whilst there was an unrequited love for the ingredient there was a craving for something new, something creative. Surrounded by indulgence and edible guilty pleasures, I began playing with the idea of combining Aoud with gourmand elements. The Tutti Frutti Collection is my edible take on a much loved ingredient"

Candy Aoud ~ "a sweet shop in a bottle". ["The ultimate candy crush of Banana, Rose, Apple & Pear is sweetened by Amber and exotic Aoud."]

I will update with notes if I can.

(short quotes via Roja Dove at Facebook, all else via selfridges)

Note: updated notes / descriptions above in brackets are via Roja Parfums at Facebook.